The coronavirus pandemic has had a heavy impact upon numerous economic sectors around the world. Real estate sales in Cyprus have also felt the effect of this viral blow and we are now experiencing a dramatic drop in demand. Only in March 2013 was anything similar recorded.

Let's see what this means for those who would like to get a house or apartment on the territory of a small island republic.

Since the nineties, Cyprus became of interest to foreigners - many wealthy citizens sought to acquire at least a temporary elite 'cottage' by the warm sea and ideally to become the owner. The trend continues to this day. Over 30 years a fairly substantial non Greek speaking diaspora has formed on the island (e.g., according to various estimates between 30 and 75 thousand Russians and a large British community). Some of them are seasonal visitors who need regular renewal of their residence permit and others are EU residents who have been issued citizenship of the republic.

Currently the islands housing market is in decline with a fivefold sales reduction when compared with the same period last year. We recall this only happened once before in 2013. Large scale sanctions against the accounts of the two most significant local banks resulted in the dramatic loss of market confidence. However, by 2019 there was again a very high interest in apartments and houses.

In the main experts predict the demand for Cypriot real estate will quickly return to that of pre-crisis times.

What are the benefits of seasonal and permanent residence in Cyprus? 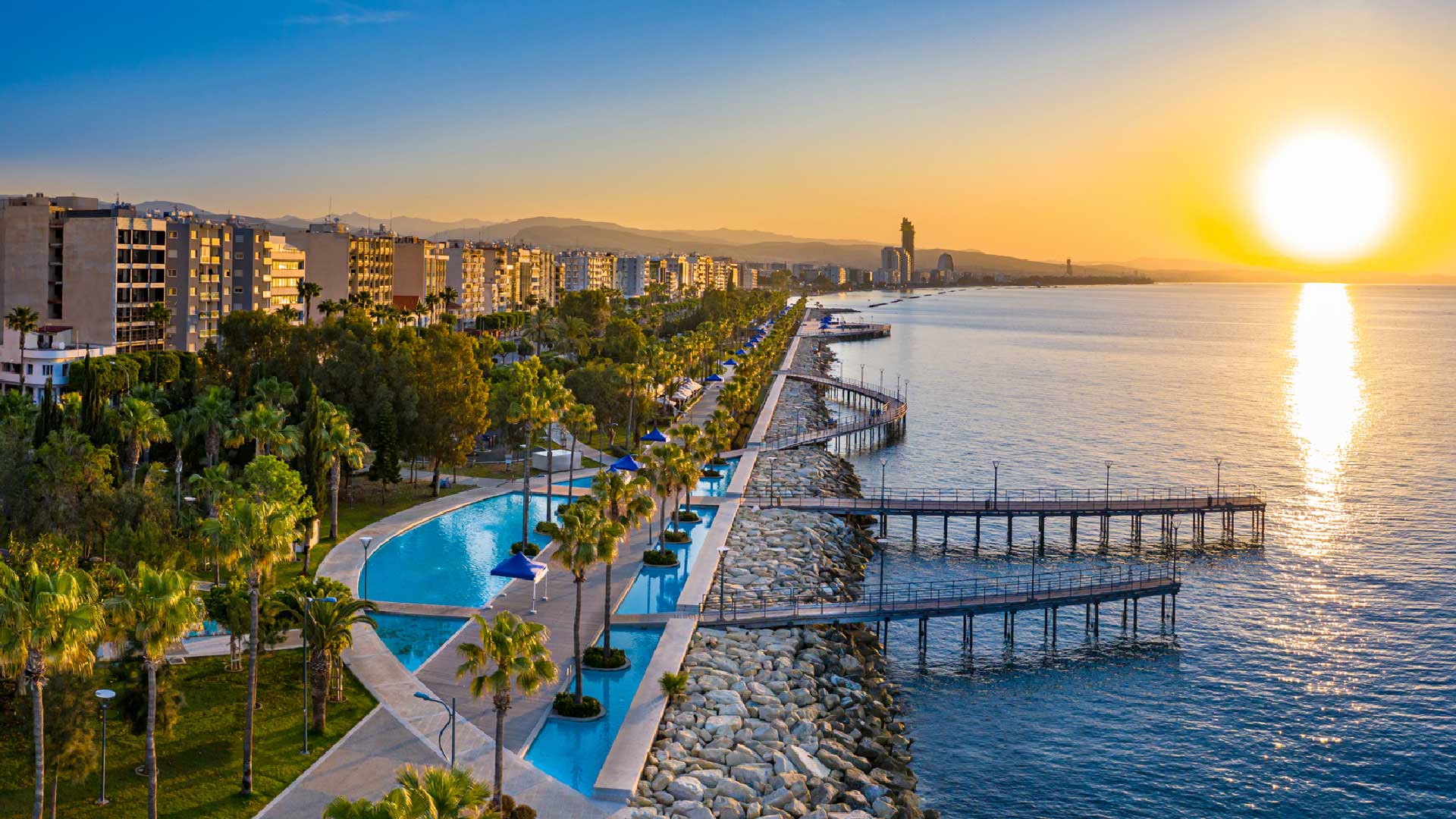 Really clean fresh air. There is no heavy industry or any smoke emitting factories. The population density is low and there are relatively few motor vehicles. Compared with the atmosphere of a typical city the contrast is striking.

The climate does not lag far behind. The sun shines almost the whole year with snow only in winter and being confined to the mountains (highest elevations). Summers are hot and dry. With all the advantages of being surrounded by a warm sea you can endlessly enjoy nature and admire the landscape - the views are magnificent.

Finally the people - Cypriots are calm, friendly and non-confrontational. If you seek peace and quiet such neighbors will be the ideal choice.

With legal formalities everything is also quite simple. For right of residence you can obtain an extended (virtually unlimited) residence permit. When buying real estate for at least € 2,000,000, you can immediately apply for Cypriot citizenship and passport (simultaneously acquiring EU residency status).

Is it suitable for everyone?

Is Cyprus the Promised Land where absolutely everyone will feel comfortable? Of course not!

You can read the previous section and evaluate what was written there from various points of view. Not everyone will be satisfied with the protracted heat and not everyone is so friendly with the sun. Neither if you enjoy a heavy snow filled winter and savor the expanse of forests and fields typical of your native land.

When speaking of expanse it is hardly possible to reference Cyprus – to be precise there are no significant “open spaces” here. The island is very small (especially since the republic does not occupy all of it) 100 kilometers by 240 - that’s all! Although even on such a piece of land there are places to travel, enjoy the terrain and simply relax. However, Cyprus does not come close to competing with most other countries in this regard.

There are practical domestic issues. Regional heating is not available, so in a short winter you will have to make provision for heating your own home. i.e., pay for electricity/gas/oil dependent the method you decide to utilize. Furthermore, many times more energy will be expended during the warm period for cooling when temperatures can reach + 40 ° C in the shade. Air conditioners will need to work virtually around the clock. Unfortunately, on the island the electricity needed for all this is by no means cheap.

According to analysts, in the vast majority of cases, foreigners take housing for themselves - for personal and family use. The purchase to rent option is much less common. In addition, priority is given to secondary housing - it is always easier and with fewer possible problems.

The main categories of residential real estate in Cyprus are villas, houses, apartments (flats) and town-houses.

Houses often come complete with a plot of land with a garden and a complement of recreational facilities including a swimming pool. It is considered a prestigious and very comfortable option. However, prestige and comfort come with many additional costs. It is unrealistic to maintain such a property by yourself. At least a minimal number of staff will be required and the labor of the personnel will have to be paid for. Failure to attend to this will inevitably result in an overgrown garden, algae in the pool and a house full of dust. In addition you will require a security guard, especially if you do not plan to live in the villa all year round. Although the crime rate in Cyprus is relatively low (incidentally this is a huge bonus) it is unrealistic to endanger your investment of millions even in such low risk conditions.

Prices range widely. There are massively expensive luxury mansions where the upper cost is almost impossible to define. On the other hand there are quite reasonable budget houses although still being more expensive than an apartment. The maintenance of even the most modest home will cost several thousand Euros per year.

They are mostly in demand by those who prefer to reside on the island during the summer period or just a few months of the year. They are especially popular with couples who have children.

This option is attractive due to a lower purchase price and minimal maintenance costs, (many times less than the cheapest villa). As well as the simple maintenance requirement it is very easy to leave the apartment vacant for several months without a problem.

Of course there are elite options. In Limassol, a 37-story skyscraper is being built with 84 apartments. These will obviously be expensive due to the city location opposite the coast and their massive areas with all amenities. In addition you would have the prestige of living in the island’s tallest building.

Buying an apartment can be a daunting task as apartments are in great demand. It can be very difficult to find an acceptable option right away. The location plays a very important role. For example being in close proximity to those who came to work from Eastern Europe is undesirable. Such points need immediate clarification.

They are small buildings with a few apartments and separate entrances. Characteristically they are a little remote from the main infrastructure and the further they are away the cheaper they become. For a comfortable stay in a town-house a personal car is desirable.

There is a wide price range. For potential buyers this is good news as there is an opportunity to choose a property to suit any budget. Let's go over some common features and specific examples so that you can understand approximately what to expect for your money.

The biggest price tags are found in the larger cities of Limassol and Nicosia. The next level down is applicable to Paphos and Larnaca. We are only referencing housing built in full compliance with the building standards and specifications necessary for construction in a seismically active zone. Therefore, treat unusually cheap offers with extreme caution as there is a high probability that something will be wrong with the property.

Growth in housing demand in Cyprus for Foreigners

In the last 2-3 years there has been a significant increase in the number of foreigners showing interest in buying housing on the island. More and more requests are being received especially for new buildings in the metropolitan areas in the price range of 1 to 5 million Euros.

There are specific reasons for this situation:

Above we described the main aspects of buying real estate. However it is not necessary to immediately “take the bull by the horns”. If you just want to try the idea of temporary, periodic or permanent residence on the island you can enter into a rental agreement. This is a much lower budget option that allows you to get used to the new realities and, at the same time, you can also reliably evaluate your stay in different types of housing.

Bear in mind that renting a house or apartment in Limassol will be much more expensive than in any other locality. As the business center of the country it requires many specialist workers who need accommodation. Consequently there is in a high demand for rental properties and correspondingly high rents.

Rent is getting more expensive year by year, especially for apartments. Compact studios and 4-bedroom options are in greatest demand.

Based on 2018 prices for renting a small apartment in Limassol the cost is €600–€800 (this is about 20-30% more expensive than in other regions). However, for a trial stay lasting only a few months this is not so significant.

We have already mentioned that for certain investments in Cyprus real estate you can obtain citizenship of the country. When we are talking about real estate the minimum threshold is 2 million Euros. After making such a purchase you can quickly obtain a passport for the republic.

There is an alternative option to invest at least 2.5 million in shares or government bonds. However, this path becomes more and more problematic over time. There are additional requirements for specific contributions, individual checks and the need to have a visa or residence permit six months before submitting an application for citizenship.

In general it is real estate that is the cheapest route to obtaining a passport as a Cyprus citizen and, at the same time, the status of a resident of the European Union. Previously the minimum threshold was 5 million but over time it has been lowered.

Such programs are not limited to Cyprus. For example in Malta a passport can also be obtained, under the Citizenship for Investment program, for a contribution of € 250,000 and a 5-year housing rental agreement (or purchase).

Analysts record a steady increase in the number of foreigners who acquire European citizenship in this way.

The possibility of acquiring Cypriot citizenship and EU resident status through financial investment has only become so attractive in recent years. Just a few years ago, such a “purchase” required a minimum of 5 million Euros - 2 times more than today.

In general, there are very few countries in the world that offer such a method of obtaining a passport - only 10.

However, since 2019, there has been some complication in this procedure. More precisely there is a more stringent regulation of investments. Now it is necessary to make contributions to a number of specific organizations:

There are more demands and directly to the investors:

“Citizenship through investments” is the best way for those who want to get the coveted passports for themselves and loved ones but are not ready or do not plan to permanently reside in Cyprus.

In 2018–2019, there was a steady upward trend in the number of transactions for expensive real estate (priced from € 1 million). In 2018 alone over 100 transactions of 2 million or more were recorded (this includes both expensive housing options and “package” purchases of several objects at once).

The total volume of houses and apartments sold amounted to more than 3,000. One third of the transactions were made by Europeans and the rest by third-country nationals.

The most popular city in terms of real estate for foreigners was Paphos - almost 80% of total sales.

In second place is Larnaca with approximately 50%. and in Limassol, this figure was 36%.

However, if we evaluate the category of luxury housing, then Limassol is already significantly overtaking both Paphos and Larnaca by almost 10% (3.3 and 2.9 respectively). This trend is directly associated with the price.